The Princess Bride: A Cranberry!

In the spirit of looking for and accepting life’s cranberries, I will share some of my latest cranberries in my next few blog posts. First off, I’m excited to start reading a new book I just bought. As You Wish, written by Cary Elwes, is, as expected, about the making of the now-classic movie The Princess Bride. That movie is so fun to watch—from the quotable lines to the fantastical fights to the predictable ending—it’s just plain fun!

The movie is shown as a story being read by a grandfather to his grandson. The story itself is about a beautiful princess who falls in love with a plain, ordinary farm boy. Westley, the farm boy, leaves Buttercup, the princess, to seek his fortune across the sea. Tragically, his ship is ambushed by the Dread Pirate Roberts, a pirate with a fearsome reputation for killing all of his conquests. Although Buttercup vows to “never love again,” the prince of the land, Prince Humperdink, chooses her to be his bride. His intentions toward her, however, prove to be less than admirable. Humperdink’s goal is to start a war with a neighboring country by framing the enemy for killing his bride-to-be. As it turns out, Westley was not killed and saves Buttercup from the killers. Westley has to fight many in his quest to save Buttercup, including a giant, an expert swordsman, the prince, and even death. To be fair, Westley is only “mostly dead” when Miracle Max brings him back to life. If he had been completely dead, there would have been only one thing to do: “go through his pockets and look for loose change.”

Westley and Buttercup venture into a fire swamp during their escape, battling R.O.U.S.’s (Rodents Of Unusual Size), quicksand, tortuous villains, and the evil prince.  Along the journey, the giant and the expert swordsman become their accomplices, and the story has a happy ending.

Even though fairy tale love stories are not usually my thing, this movie offers enough sarcastic wit and sports-like combat to make it fun for me to watch. Reading the first-hand account of filming this film is proving to be enjoyable as well. Cary Elwes talks about being cast in the role, and learning to fence like an expert swordsman. He and Mandy Patinkin seemed to spend the entire time during filming practicing for the epic sword fight. Cary talks about scurrying back and forth like crabs and how that really worked muscles that he hadn’t used before. You can see it for yourself in this clip from youtube:

The funniest scene in the movie is, of course, with the magnificent Billy Crystal as Miracle Max. The interactions between Miracle Max and his wife (played by Carol Kane) is hilarious!

The Princess Bride movie, and this book on the making of it, is a cranberry that I’ve been enjoying recently.  When faced with last-minute work requests, MRI’s, dishes piling up, and many other every-day issues, it’s important to take time to look for and accept life’s cranberries.
Posted by Bookstaff's Blog at 10:48 AM 3 comments: 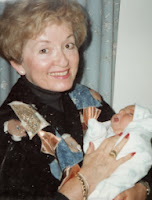 Today, November 26, 2013, is the 10th anniversary of the passing of my mom, Annie Bookstaff. While the Yortzeit Memorial Candle burns brightly, I'm going to share with you 22 random facts about Annie Bookstaff.

1. She was born in New York City and raised by her stepfather (Zaide Sol to us!) after her father died.

2. She found her half brother through an article in Good Housekeeping magazine.

3. One of her favorite movies was Seems Like Old Times with Goldie Hawn and Chevy Chase. She often quoted the line "She's not outside eating chicken, that's for sure!" You have to watch the movie to understand, but, trust me, it's funny!

4. When we "ran into" Michael Jackson in Las Vegas, my mom was the one who saw him first and set our adventure in motion.

6. She loved dogs and would have LOVED that I got a service dog!

7. She liked shopping at TJ Maxx so much that it was in her eulogy!

8. Also from her eulogy: "Annie was to purses what Jackie O was to sunglasses." (eulogy written and delivered by my brother- in-law Larry Kaye)

9. She was a real estate agent. When one of her clients first moved into their new home and had a delay in water service, she had bottled water delivered immediately!

11. She liked to drink margaritas!

12. She treasured our yearly family reunions--she wouldn't take no for an answer!

13. Sedona, Arizona was one of her favorite places to visit.

14. She liked fast cars; her dream was to fly on the Concorde...when it still existed!

15. She always wanted to go into space.

16. She loved to play golf. When she hit a good putt, she would say "even a blind chicken gets good sometimes"..... Cracked us all up!

19. Her mother had 8 siblings, but she was an only child.

21. She unselfishly encouraged each of us to follow our dreams, even though our dreams took us away from our hometown.

22. She drove across the country several times to help each of us start our adult lives in new towns.

We love you mom! We think of you often and you will always be with us!
Posted by Bookstaff's Blog at 10:04 PM 2 comments:

I've had a tough week, physically. I've been getting really tired, my eye was bothering me, etc. On top of that, some guy in a truck actually got out of his vehicle to come to my window to yell at me for waiting for a parking spot at Safeway! A van was blocking all the spots, and I really couldn't go anywhere. Plus, he could have gone around me! Anyway, having a bad week all around.

Next birthday is the big 5-0, which everyone makes a big deal about. Seriously, though, with me it's really not the YEARS, it's the MILEAGE.

This morning, a thought occurred to me after I was tired from getting dressed: maybe I need to be in better shape than the average person to deal with life. Wouldn't it be awesome if I was in the BEST shape of my life at 50? Screw my "disability!"

I haven’t posted a new blog in a long time, but I have been updating a feature on my Facebook and Twitter pages. Cranberry of the Day posts offer something positive that either happened in my life, something good I did, something funny I saw, or a piece of good luck that came my way. Cranberries range from a passing thought that can bring a smile to my face to an amazing encounter with Steve Young! My Cranberry of the Day posts have been updated fairly regularly in 2012 (no, not EVERY day!), and I am sharing them all with you here. Each month of Cranberry of the Day posts in 2012 is seen as a separate entry on this blog.  As you look at these, I urge you to remember your own cranberries. Sometimes, you have to be willing to look for them and accept them.

Cranberry of the Day October 2012

Cranberry of the Day: Panoramic shot at the beach today!

The kids are growing quickly! The Canine Companions for Independence “E” Litter is already 5 ½ weeks old! Check them out on Livestream: http://bit.ly/Oo7334

Cranberry of the Day #2:My son Andy turned 15 today and my daughter, who's away at college, posted a trip down memory lane as her status. It's nice to see they love and miss each other! I'm so proud of both of them. Happy Birthday Andy!

Cranberry of the Day: Go Giants!

Cranberry of the Day: Go Niners!

Cranberry of the Day: My student, Lisa, presented this study on Happy's recovery at a science conference last weekend. Good job Lisa!

Cranberry of the Day: Trying to grade assignments, but my thoughts keep drifting to: "he actually jumped off a hay truck to come talk to me!" A's for everyone!

Cranberry of the Day: This one will last awhile: at the Pumpkin Festival Parade in Half Moon Bay, Steve Young JUMPED off his "float" to come talk to me and sign my shirt!

Cranberry of the Day: Video features National Marine Life Center in Cape Cod. Exec Director Kathy Z was on the Board of SF Cetacean Society before she moved East. She's doing an AWESOME job! http://www.capecodonline.com/apps/pbcs.dll/article?AID=%2F20121011%2FMEDIA0302%2F121019956

Cranberry of the Day: Bike ride to the beach. What did YOU do today?

Cranberry of the Day: Bring Your Own Cranberries! BYOC! I think it'll catch on!

Cranberry of the Day: It pays to be a smart invertebrate with lots of arms. Check this out! http://vimeo.com/44791802

Cranberry of the Day: Hilarious! http://www.youtube.com/watch?v=6lyDspzxSrw&feature=BFa&list=LPLOSM4JO3Rlw

Posted by Bookstaff's Blog at 9:29 PM No comments:

Cranberry of the Day September 2012

Mama Taya (with puppy Emma) is a natural!

Cranberry of the Day: Today in the gym, Chip had me jump on the mini-trampoline WHILE clapping in rhythm. Jumping without hanging on was challenging, but fun! The aide behind me had the unenviable task of NOT letting me fall!

Cranberry of the Day: Cool article posted by one of my biology students! http://www.nytimes.com/2012/09/02/us/sniffing-out-a-subtle-scent-to-help-save-some-whales.html?pagewanted=1&_r=2&ref=dogs

Posted by Bookstaff's Blog at 9:22 PM No comments:

Promote Your Page Too

Welcome to my blog. I wrote a book about my struggles following the removal of a benign brain tumor. I’m using this blog to continue to share my challenges and victories. I’d love to hear your stories too! My book is called “When Life Throws You Lemons…Make Cranberry Juice!” My sarcastic twist on the famous cliche is my way of adding a touch of humor to my situation. Keep up with my blog for stories that will make you laugh more than cry!